Part III - Devastation and Recovery from the Great Flood of 1937

The greatest flood disaster that ever visited Pulaski County happened in January, 1937, when possibly one-third of the entire county was under water. The damage may have been as great as $2,000,000, although no one ever compiled the figures.

Early in January of that year, heavy rains fell all along the Ohio and on the mountain watersheds of this great stream. There were snows and sleets. By the middle of January, the Ohio was a big river and rising, and then came the rush of water from the upper reaches of the stream that flooded cities all along the river, Cincinnati, Louisville, Paducah, Harrisburg, Shawneetown and others.

Levee construction by the government gave the towns threatened in the county courage, and it was not until a week before the flood that some uneasyness was felt. Cities farther north were flooding. The river forecasts for this area were still within the bounds of safety.

It was not until Saturday, January 24, that the government began warning people of the flood danger. The river then was surging to within a few feet of the top of Route 37, which now has a big levee protecting it but which was then, the top of the levee. The highway between Mound City and Mounds stood but a little way out of water. The water then, was almost at a record level.

Water rose rapidly and by Monday, January 25, was starting to spill over the road north of Mound City and was near the pavement between Mound City and Mounds.

Mounds began moving as water came in from the overflowing highway. It could be seen approaching and then running along the ditches at the side of streets. It advanced in waves, receded a bit and advanced again, and each time it was farther than before.

Tuesday found water over much of Mounds and by nightfall, nearly everyone was out.

All connections with Mound City were broken by Tuesday morning, save foot passengers walking the levee to the Illinois Central.

Inside Mound City the efforts of people to move or save belongings; the lack of material to fight the flood and the lack of men and organization, played their part. But even if these had been perfect, it would have been difficult to save the town. More personal property could have been saved.

While Mound City and Mounds were fighting flood waters and trying to save property, another flood swept across the county, which was almost as disastrous. The Ohio River broke through a levee in Massac County and got into the Cache and swept down on Karnak. The attempt to stop the flood there was useless. Water soon had most of the town covered, and while never so deep, it was deep enough that nearly everyone abandoned their homes.

The Cache River became a river. One could get in a motor boat at White Hill at the railroad, and ride to the Karnak Spur. The water shallowed in places, but the river was from two to five miles wide in places and in the early part of the flood, it flowed at high speed.

This water swept down on Perks and it almost surrounded Ullin. It got so high that the Illinois Central kept cars on the track to keep it from washing. The state highway was flooded some three feet deep or more for a space of more than a mile.

The Cache continued to race on west and south and turned and ran into the Mississippi. When Ohio waters rose high at the mouth of Cache it forced the Cache to turn backward to the Mississippi. The Mississippi, fortunately, was at a low stage, which saved Cairo and it also saved cities farther south from destruction. The Mississippi River showed the effect of the Ohio River far past Cape Girardeau, Mo., and on the succeeding nights, when Cairo watched water from over bulkheads which were patrolled, a slight rise of the Mississippi would have brought disaster.

In other words, Cairo barely escaped. Even a windy day would have brought ruin to that city.

In Mound City, it became apparent that the back levee was the danger spot. Water soon rose against the bulkhead. On Wednesday, shortly before noon, there was a serious leak and later one developed which was not stopped, and the fight was given up. Soon water had undermined a gap and was pouring over. The levee never did break. The bulkhead was undermined, possibly because it was not dug deep enough, and water came in. Even when it became a roaring torrent, it did not cut a gap over 20 feet wide and 6 or 8 feet deep.

Water rose in the town all that day and night. The howling of dogs, the cries of fowls and the mewing of cats could be heard everywhere along with the popping of ice, for heavy sleet sheets were floating about.

Water rose again the last of the week. Actually, the bulkhead at the Shipyard was completely covered by water at the height of the flood, which shows that the town could probably not have been saved. The bulkhead on the back levee was covered almost entirely at the high point of the flood. The flood probably reached 65 feet at Mound City, a record height. 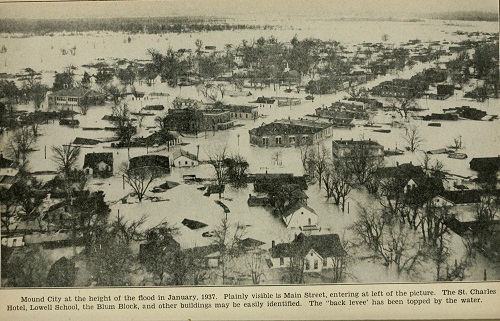 From dates of the Pulaski Enterprise, these things are gleaned. Flood January 27. Entered the office February 20, which was in a boat with water still six feet deep. March 19 got out the first paper after the flood. The office had water in it for six weeks. Some of the town had water in it more than eight weeks. Greatest depth of water in Mound City, about 20 feet and shallowest about 12 feet at the Postoffice in the Phoenix Block.

Dazed and bewildered people returned to their homes. Many had been in refugee camps. Many had been with relatives. It was a discouraged and dismayed people who surveyed the wreckage of homes.

The Red Cross came in and did considerable, but the Red Cross helped those who could not help themselves, as a rule, and while it is the only agency working in the flood relief, it gave relief to only a part of the loss. Perhaps all relief agencies meet that criticism.

The State of Illinois built a levee for Mounds to protect them from waters from the east and strengthened the back levee at Mound City. However, these are not adequate now unless they are strengthened further.

The total loss over the county easily reached $2,000,000. The loss of time and interruption of business, of course, cannot be estimated. There were five lives lost when five Negros drowned as they left Mound City for Mounds in a boat and their boat hit an ice cake.

At the peak of the flood, the Cache River actually made an island of most of Pulaski County, which could be reached only by boat. Route 37 was blocked at White Hill and required boats and Route 2 at Ullin where boats were required. The Cache and Ohio surrounded most of the county and covered much of it too.

During the peak of the flood, more than half of the people of this county were homeless. All of Mounds and Mound City were driven out. Almost every home in Karnak was vacated entirely. Perks was completely under and the outskirts of both Ullin and Pulaski were under water. In addition to this, many farm homes had to be left, for the Cache was a raging river the size of which no one had ever seen before, as the Ohio took a short cut to the Mississippi. Possibly the total who fled from home from one week to two or three months was 8,000.

In evacuating people, the National Guard, the Illinois Emergency Relief and the WPA took part and there was confusion. Those who experienced it know the need of an organization, centralized body which can command trucks, provide shelter and food and care. At that, these organizations did well, and the Relief worked best.

Those who experienced the need to suddenly leave home know of the need of help at that time. They also know that a more accurate forecast of river dangers in advance would provide time in which to leave and to store belongings. Given one day of time more than was granted before warning was issued, and given the help of a fleet of trucks, and half of the personal property loss would have been averted.

The loss fell upon individuals, for there was no flood insurance carried. The restitution given by the Red Cross was to those not able to rebuild or without resources. The man of average resources bore his own losses. Those without resources, were helped.

Now, some six years later, much of the traces of the flood are gone. Mound City, hardest hit, still bears the marks. But hard work and a determination to make home a home again gradually removed the flood stains.

It is a tribute to the people to see what has been done after so terrible a flood.