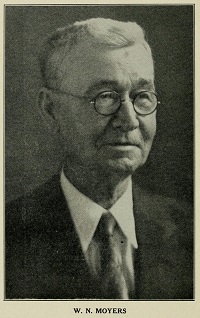 It is to W. N. Moyers that the credit must be given for the move to produce something to celebrate the county's 100th birthday. It is to him that most of the knowledge contained within this book must be credited.

School teacher, surveyor and historian, he will long be remembered.

He came up through life by work and by ability. To the very end, he was a student and ready to learn. His quest for knowledge never ceased.

It is to be regretted that he died before this book saw print, and as it was being written, he could not aid as he would like to have done. He only knew that it was being done, and that much of the things he knew and had told about were being written.

It could have been made an exhaustive history, but such would have required much time, labor and expense. This is to fill a practical place and need.

The history came about, indirectly, through the efforts of Mr. Moyers. He sought to get this county interested in observing its centennial and to this end he worked. Because of war such a thing as a celebration was hardly possible, and it was suggested that perhaps a history might be issued.

Encouragement was found at the hands of the County Board and others. Mr. Moyers agreed. The cost was considerable, but through advertising, sale of books and by help of the County, the book is produced.

The writing is not by Mr. Moyers, but rather by his son-in-law, J. L. Wall. But when it comes to the facts in the book, many of them came from Mr. Moyers or he suggested where they might be found. In a good many ways, it is Mr. Moyers speaking through Mr. Wall. Certainly the fund of knowledge Mr. Moyers had and which passed on to Mr. Wall is very fortunate for this county. It is to be regretted that illness and death overtook Mr. Moyers before this book went to press.

Very few counties can produce so complete a history, so brief and so well told.

There is an added chapter by Joseph O'Sullivan about the First World War and about the present World War up to December, 1943. We have added a chapter about the great flood of 1937.

We trust the book will find favor as we think it deserves.