1912 A History of Southern Illinois

Pulaski is also an Ohio river county. It lies between Alexander and Massac. It is one of the smaller counties, having only 190 square miles. It was formed by taking a part of Alexander and a part of Johnson. This was done March 3, 1843. The commissioners were Henry Sowers, Thomas Lackey, Jr., and Thomas Howard. They met in the home of Thomas Forker and decided upon the location for the county seat. 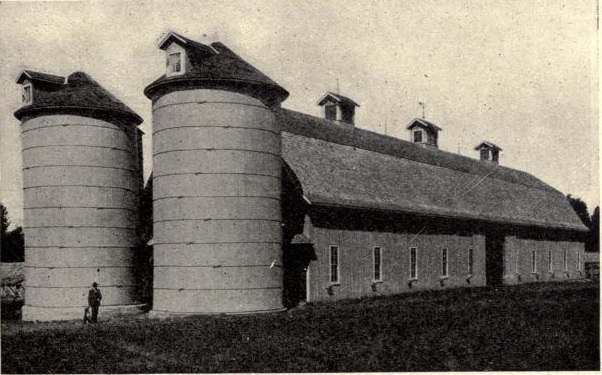 The town of Caledonia, some eight miles above the present Mound City, was selected as the county seat. There was already a small town there. In 1836 there were two or three stores and not more than a dozen families. Here was built a court house and jail. The county seat remained here till the summer of 1861, when it was removed to Mound City.

MOUND CITY OF THE EARLIER TIMES

This new county seat was first settled in 1812 but it probably grew very slowly. The new county seat was located on land subject to overflow and this of itself was quite a drawback. In the first year after the Phillips family came to Mound City the massacre occurred and no one else came for many years. In 1838 some houses were built and from now on the town grew. A number of families came. They settled near a big mound near the river bank. In 1838 one Coblitz built a store in Mound City. It seems that at this time the place was a wood yard for boats on the Ohio. Three roads led away from the new county seat. One from Mound City to Caledonia, one to Unity upon the Cache, and one to Jonesboro. About 1839 Mr. James Dougherty, father of A. J. and J. L. Dougherty, came to Mound City. Mr. Dougherty ran the wood yard and cultivated some land. 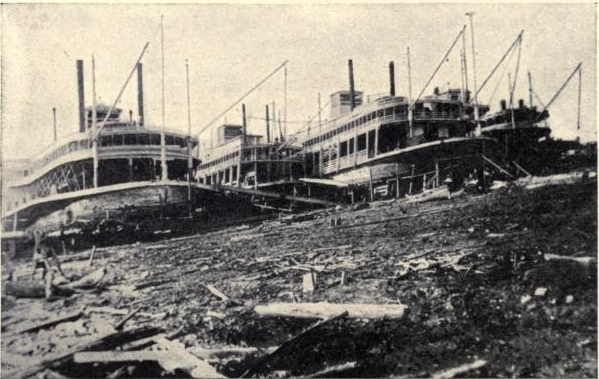 There can be no doubt that the deep water of the Ohio at Mound City, the nature of the banks, and the fact that the river seldom froze at that point, all contributed to give the place prominence among the boat men of the Ohio and the lower Mississippi.

Among the early men of prominence who came to Mound City was Gen. M. M. Rawlings, who had been a man of affairs in Illinois for several years. He came to Mound City about 1853. The next year he had the town surveyed. The people who had previously gathered at this point had all gone. There was one fairly good cabin left. This served for shelter for the future arrivals till Gen. Rawlings built a commodious frame in the latter part of 1854. Other houses were built one by William Dougherty, another, a brick, by F. M. Rawlings in 1856. General Rawlings was instrumental in building the short railroad which connects Mound City with the Illinois Central at Mound Junction. It was completed in the spring of 1856.

PLANS FOR THE GREAT EMPORIUM CITY.

In this year was completed a great scheme in Cincinnati, Ohio, for the building of a great city on the lower Ohio. The company was known as the "Emporium Real Estate and Manufacturing Company." This company bought land adjoining the town Rawlings had laid off and there laid off another city with large parks, squares, courts, etc. Public sales were held and in all something like $400,000 was received for all lots sold. Some lots sold for $113 per foot front. The company bought a steamboat, and bought Gen. Rawlings' railroad. When the company got hard up they sold the engine and used mules for motive power. The crash finally came and Emporium City was incorporated with Mound City in a charter in 1857. The company, before the crash, had built an immense three-story brick building to be used as a foundry. Here machinery was installed and the heavy machinery for the marine ways was cast here. It was used by the government in the Civil war for a naval magazine. An explosion ruined parts of the building. 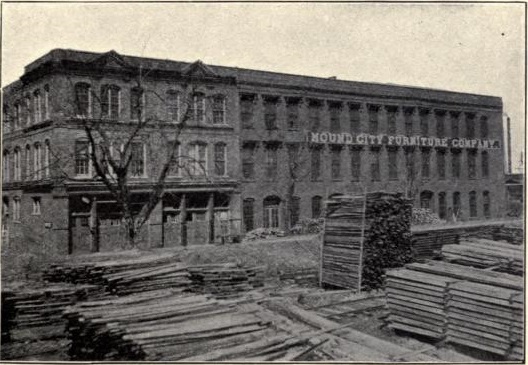 THE BUILDING USED AS A HOSPITAL IN MOUND CITY,
to which were brought the wounded Soldiers from the Battlefield of Pittsburg Landing and other Fields of Carnage.

The marine ways was another enterprise of the Emporium Company. The ways was built by a Mr. Robert Calvin. This great industry is the repairing or building of boats. It can not be described here in detail. Suffice to say a boat is run alongside the ways and with powerful machinery it is drawn sideways upon the ways and there propped up for repairs. During the Civil war this was of immense value to the general government in remodeling and repairing the river fleet. The government leased the ways and paid $40,000 a year rent, and employed the owner, Capt. W. L. Hambleton, as superintendent. The three ironclad gunboats, the Cincinnati, the Cardondelet, and the Mound City were constructed on the marine ways. At times as many as 1,500 men were at work on the ways.

A great block of buildings was built just before the war and known as Union Block. It was three stories high. It was occupied as a hospital during the Civil war and was perhaps the largest one in the west. It received wounded and sick soldiers from all the battles in the vicinity of Kentucky and west Tennessee. It is said that 2,200 wounded were brought there after the battle of Shiloh. 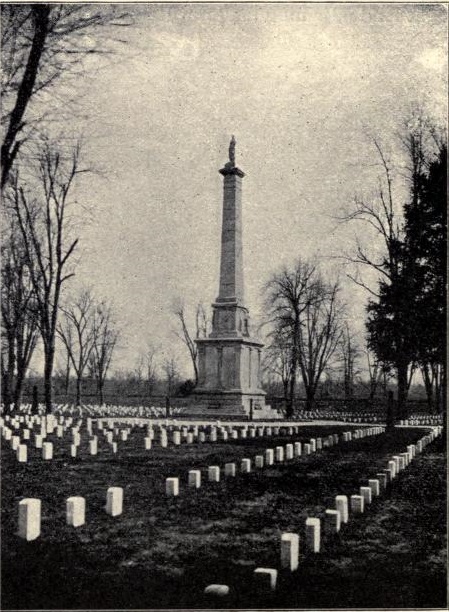 THE NATIONAL CEMETERY NEAR MOUND CITY

Those who died in this hospital were buried above Mound City. After the war their bodies were all removed to the site of the present national cemetery, a mile west of the city. There are 5,555 soldiers buried in this cemetery. The grounds are enclosed with a substantial iron fence. The state has erected an appropriate monument, and the government provides an attendant to care for the grounds.

The Mound City of today is a steady, conservative business center. It has large business firms and an extensive trade. In addition to the branch connecting with the Illinois Central at Mounds, the county has the Big Four, besides an electric line and the river facilities.

In 1858 the Ohio overflowed its banks and the town of Mound City, as well as Cairo, was flooded. Another flood in 1862 put the people to work to build levees. Only once since the levee was constructed has the water gained entrance into the city. The recent flood, April, 1912, was the highest in the history of the city, and yet the levees withstood the surging flood.

VILLAGES OF THE COUNTY.

There are several thriving villages in Pulaski. Among them are New Grand Chain, Olmsted, Pulaski, Ullin, Villa Ridge and Wetaug. New Grand Chain is on the Big Four railroad in the extreme east end of the county. It is in a good farming community. There are large areas of swamp land to the north and east which will in a short time be drained and then we may expect increased production of farm crops and conse- quent increase in business. Olmsted is near the site of old Caledonia. It is a village of 288 people. It is situated on the Big Four railroad. Villa Ridge, Pulaski, Wetaug and Ullin are on the Illinois Central north of Mounds. Their chief interests are farming and fruit raising. Grape culture has prospered about Villa Ridge.

Mounds, which is on the Illinois Central seven miles north of Cairo and at the junction of the Mound City branch, is a city of 1,686, whose interests are almost wholly in railroading. Here are the railroad yards, round houses, banana houses and railroad offices. It is connected with Mound City and Cairo by electric line.