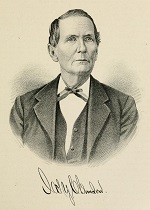 JAMES Y. CLEMSON, merchant, Olmsted. Among the enterprising men of Pulaski County, who, by their own exertions, have carved out their way in the world, accumulating wealth and at the same time benefiting their country and their fellow-men, is the gentleman whose name heads this sketch, and whose portrait appears in this volume. He was born in Edwardsville, Ill., March 20, 1821, and is a son of Eli B. Clemson, a native of Pennsylvania, and of German descent. The latter was mainly self-educated, and entered the United States Army at an early age, in which he received the position of Second Lieutenant. He was afterward, for bravery and ability, promoted to First Lieutenant in the First Regiment of Infantry, his commission bearing the signature of Thomas Jefferson, then President of the United States. He was afterward promoted to Lieutenant Colonel in the Sixteenth Regiment of Infantry, his commission in this case being signed by President James Monroe. He participated actively in our second war with Great Britain, and afterward was stationed at St. Louis and at Fort Osage. He arose from Second Lieutenant successively to First Lieutenant, Major, Lieutenant Colonel and to Colonel. When the war-clouds were all dispelled from our country's horizon, he laid aside the sword and took up the implements of peace, but afterward bore an honorable part in the Black Hawk war. He located in Lebanon, St. Clair Co., Ill., and for a time operated a line of stage and mail coaches between Vincennes and St. Louis. He then went Carlyle, when he embarked in merchandising, and in 1832 moved to Carrolton, Ill., and again engaged staging, running a line of mail and passenger coaches between Springfield and St. Louis. His wife, Ann Maria Oliver, of English descent, and a native of Nova Scotia, died in June, 1833 of epidemic cholera, leaving four children. He then went East to New Jersey, where he left his children (except subject) to be educated. They were Henry A., James Y. (subject), Frederick W. and Mary C., the latter and our subject being the only two now living. The eldest son, Henry, was an officer in the United States Navy, and was lost during the siege of Vera Cruz (in Mexican war), when the United States brig "Somers" capsized in a squall, and to the lost of the ill-fated vessel the Government afterward erected a monument in the navy-yard at Annapolis, Md. Col. Clemson, after his return from the East, in 1836, located in Pulaski County, and again married. His second wife was Mrs. Esther Riddle, the widow of Capt. James Riddle, the founder of the towns of America, Ill., and of Covington, Ky. By his second marriage he had two children, Aaron B. and Theodosia B. Col. Clemson now engaged in farming; he also kept the post office and acted as County Clerk. He was one of the projectors of the town of Napoleon, in this county, not a vestige of which now remains to show where it stood. He was also agent of the Winnebago Land Company, and was long identified with Col. Henry L. Webb and Col. Justus Post. He died in 1842 in this county; he was one of the leading men of his day, and esteemed by all who knew him.

Our subject, Mr. J. Y. Clemson, spent his youth in Caledonia (this county), and at the age of fourteen years entered McKendree College, at Lebanon, Ill., where he remained for four years and then returned home. He afterward went to Texas, remaining some two years engaged in merchandising, and then went to New Orleans and followed boating for about six years. He then returned home and again entered the mercantile business, and after four years took command of the snag-boat A. H. Sevier, in the employ of the Government. After about three years, he retired from the river and again engaged in merchandising and in the manufacture of furniture at Mound City until 1861, when he entered the service of the United States as second master on the gunboat St. Louis in participating in the battles Forts Henry and Donelson, and in the battle of Columbus. In 1862, he resigned on account of ill health, and returned home, where he has since remained engaged in mercantile pursuits. He is a large land owner, having about 800 acres, and one of the most beautiful homesteads in the county. He was married November 25, 1849, in Caledonia, to Miss Henrietta McDonald, born August 7, 1832, in Circleville, Ohio. She is a daughter of Richard and Mary J. McDonald, the former a native of Canada and of Scotch descent, the latter of Ohio and of German descent. She is a member of the Presbyterian Church. Mr. Clemson is a member of the Masonic fraternity, and of Cairo Commandery of Knights Templar, also of the Episcopal Church. In politics, he is a Democrat.